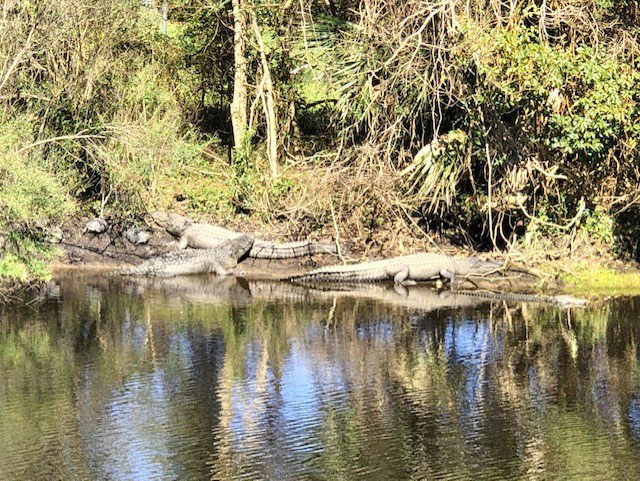 The alligator. Hilton Head Island’s original local inhabitant. You’ll see them sunning on the banks of the lagoons or leisurely swimming around in search of their next snack or lounging area. We get a lot of questions about them and if visitors should be concerned. I was born and raised on this island and can safely say that no, the alligator is not something you should worry about….if you are being smart and respecting the fact that this is their home. The paragraphs below are from the Town of Hilton Head website. They are so interesting and so important to our ecosystem we thought you may like to read a bit more about them!  Photo was taken by the Ocean Gate of Sea Pines at the beginning of February 2020!

The largest freshwater reptile on Hilton Head Island is the American alligator (Alligator mississippiensis). The group of reptiles to which alligators belong has been around since the time of the dinosaurs, relatively unchanged except for size — they’ve actually gotten smaller! Alligators are considered “keystone species”, a species that helps to fashion its environment and influence the types of species that live there. This is especially true on barrier islands like Hilton Head Island, where alligators perform necessary services like providing fresh water for other wildlife to drink during droughts by digging “gator holes” that bring groundwater to the surface, while providing alligators with a cool, wet place to rest. They are also large predators that help to control the numbers of many of the species they eat, which in turn can influence all of the species that each of their prey feeds on. If a keystone species becomes extinct, the entire ecosystem changes, and many species that have come to depend upon the keystone species may also face extinction.

Like most reptiles, alligators are cold-blooded, which means their body temperature is not constant like ours, but changes with the temperature of the environment. During our coldest months, alligators hibernate in freshwater ponds and lagoons, often digging down into the mud. During the warmer months, alligators alternate between basking out of the water to warm up, and remaining in the water to cool down to maintain the best body temperature for activity. After a courtship in which males claim a territory and court a female, the female lays between 20-60 eggs near a body of fresh water and covers them with vegetation. She remains nearby (for up to 65 days) while the eggs incubate. When they are ready to hatch, the young call to the female from inside the nest, and she digs up the nest and brings the hatchlings down to the water one-by-one in her jaws. The young remain with the female for up to a year and are defended by her against predators like wading birds. Alligators can grow to over 13 feet in length and can live to over 60 years.

Alligators are protected by both state and federal law, but still need our help. You can help us protect our alligators by avoiding close interaction with them. They can move very quickly, especially when they are warm, so never approach an alligator closer than 60 feet. Don’t harass an alligator or swim in water (or let your pets swim in water) known to be alligator habitat. And above all, NEVER feed an alligator. Alligators fed by humans come to expect food with each human encounter, and if they don’t get it, may act aggressively. Since alligators are experts at finding their way home when relocated, any alligators deemed to be aggressive by the state are shot rather than relocated.

So in the end…don’t mess with them and they won’t mess with you. Take your pictures (from afar), enjoy their beauty and above all respect them! We love them and we hope you do too!!